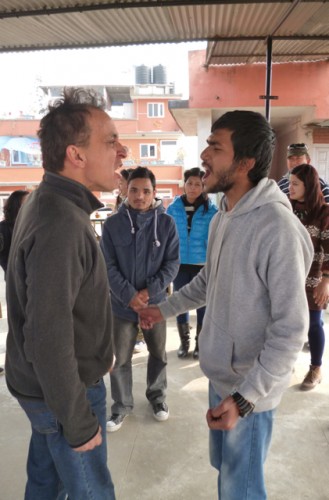 The Nepal School of Social Work asked me to run a drama workshop with students interested in using theatre as means to convey messages on social and heath issues. It is pretty unusual for a school of social work, anywhere in the world, to want theatre workshops as part of their course. However, this small but growing school is very keen to try new things and there is an understanding of how the arts can benefit vulnerable communities.

Last year I ran a clown and improvisation workshop with them – focusing on health issues around slum and brick kiln communities. During the past year students have told me they have tried using drama and clowning in their work in communities.

There is some raw talent amongst these students and and their enthusiasm is obvious. As they have very little experience in performing, I taught them a number of skills so they are better able to convey their strong messages to their community. These include messages on simple health and hygiene issues to the more complex problems of people trafficking. 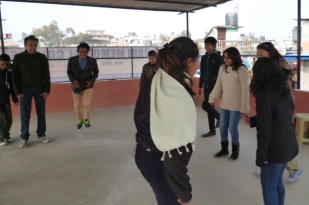 I started by encouraging them to be as physically big and loud as possible by doing some of the every day tasks, such as washing clothes at the well, or brushing hair, in as exaggerated and over- -the-top movements as possible. Students took to this exercise with gusto and started making the movements into dance routines and singing along to various songs.

We then looked at chorus work – and the idea of one group doing gestures and dialogue together was a safer way to perform for those who feel shy. We decided to look at the issues of trafficking young women, especially how they can be lured away at bus stations. We set up an improvisation where we had a young person being tempted by a trafficker and being persuaded by the larger group to stay behind. During the improvisation, I encouraged strong passion and audience participation as ways that would encourage their community to get involved in the debate.

These students showed plenty of promise and with practice and encouragement could incorporate street theatre into their social work and community development practice. 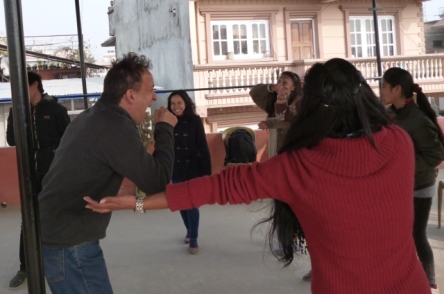 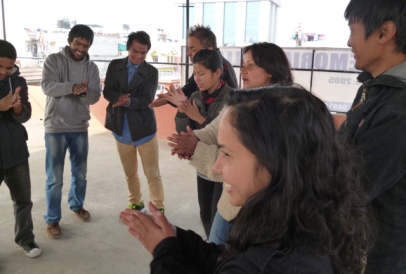 Artists in Community International’s objectives are creativity, education and wellbeing. We received most of the funds for this project through the generous donations of many supporters through our crowd-sourcing campaign.  But this is an unsustainable method of funding our work.  We are looking for donors to contribute funds to sponsor future programs – are you or do you know anyone in a position to help?  Please contact us.