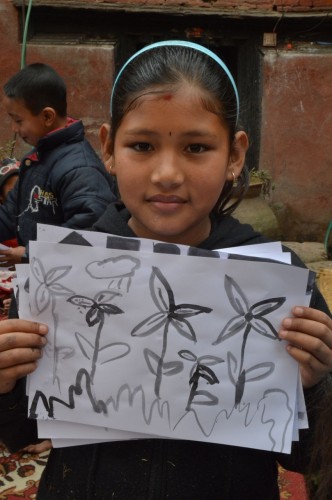 We  regularly see street children hanging round the old town of Bhaktapur.  Soon after our arrival we recognised a girl that we worked with in 2012. Noticing us looking at her she took a double take. At first she thought we were a couple of tourists – an easy target for this enterprising and street-smart young girl. On her second look she jumped for joy when she remembered us from our last year’s arts program.

She had not been attending the arts centre classes since our last visit.  After much persuasion, we convince her and her friend to come. She’s a little older than most of the children and takes the role of an informal translator. She enjoys the classes and always tries hard but because she rarely attends school, her skill development is that of a much younger child.

She is always very warm to us when she sees us in the street.  The other day as we were entering a restaurant for a drink, she came running up to us.  We always get lots of hugs and chat from her and her friends.  However, once we were inside they were being cheeky at the window. The waiter tried to shoo her away saying, “Don’t disturb our guests”, to which she quickly replied, “They are not your guests they are ours!!”

At first we thought the term “street children” meant children who lived on the streets without homes, perhaps without parents and loving care.  We thought it also referred to children who are completely on their own, surviving on their wits. We have come to realize that the term, their situations and lives are a lot more complex.  For example, UNICEF acknowledges as street children “those who may have lost their families through war or illness, or have been abandoned because they had become too much of a burden, or else ran away from their abusive, dysfunctional, poverty-stricken families and now live alone on the streets”.

The term “Street children” also describes those who work on the streets and those who are encouraged by their parents to work and earn money instead of going to school. Their work can involve picking up garbage or begging money from tourists.  Many have come from the country with their families; others  have escaped violent homes or homes negatively affected by someone with a mental illness.

All experience hardship or poverty. Their education, and thus their opportunities, are very limited.

There is a young boy who attends the art centre who seems to suffer from Down syndrome; he looks about six. We were very surprised to learn he was fifteen. We can see that being a street child with such a disability would extremely hard; he is very much at the bottom of the pecking order in his community of peers. We have been told he needs an aide at school – but of course, there are no resources for that.  At the art centre he was either ignored or hit by the others, and he would also take every opportunity to whack a smaller child. His attention span and participation were limited.  However, we understand disability well and have been able to find ways to include him in the program; as a result he is flourishing, and he particularly likes the clowning.

We pass his area as we walk towards the arts centre. He is waiting. He takes our hand and accompanies us there. He is beaming. It gives him some status and he feels proud.

Two young girls who participated in the program last year have thrived in this year’s program and have become leaders. The first, a tiny girl who was very shy, enters with a broad smile. She looks well presented; she wears a pretty skirt with a matching sash, her hair is brushed and tied back.  But the clothes are well-worn, patched together and in need of replacing. We understand her mother works as a vegetable seller at the market. It seems she has some form of education because she is able to grasp ideas and give them her own imaginative twist.  She is able to lead a small group in creative exercises and she can perform confidently alone in front of large groups. This is quite a triumph in a group where boys do not always want to acknowledge the girls’ work.

The second girl is a little older and has shown immense passion for the group. She is always early and delighted to see us as we are also delighted to see her. She is an enthusiastic participant – yet at the same time, it is clear that her lack of education and opportunities impede her in many ways. She was one of the two children who brought homework back after a drawing session (see earlier blog on PAUL KLEE drawing) and we can see her yearning for education.

Others in the group show profound learning difficulties – we are not sure whether some have an intellectual disability or whether lack of basic care, food, education and opportunity are the causes.  Many of the children are sick with colds and inappropriately dressed for the cooler weather here. They are often hungry and tired.  Yet, they are resilient little humans, eager and responsive.