We have had a long-term relationship with MGIS starting  in 2006, when I ran drama workshops in commedia dell’arte and mask with students and teachers. They have been strong supporters of our work and  are firm believers in the value of arts and education.

This year Anju Chazot, the co-founder and inspired teacher of the school, with a passion for theatre, was keen to use role-play, mime and improvisation to create short plays from The Complete Panchatantra, known as one of the oldest collection of children’ stories in the world.   She suggested I run a professional development workshop with the teachers, enabling them to use the techniques to create work with their students. These techniques give performers the ability to jump from storyteller to the characters in the tale. With the use of physical expression they may also be able to describe the environment of the tale using mime and movement expression. For example using their bodies to become a tree, a lake or river. This brings to life some of the  detail to the original story.

After a few warm up games that gets the participants physical and playful, we started work on the tales At first they found it difficult, wanting, just to tell the story through words , but slowly realized their ability to use their body. In the midst of much joy and laughter they were able to play animals and birds, and portray rivers and landscapes turning to drought.

The teachers then wondered  if this would be too difficult for students to perform and were worried the children may not be heard, as they could not project their voices. They need not have feared. The students took to the techniques as quickly as the teachers had

I was able to recognise one young girl who had a strong voice and an innate ability to jump from character to character. With time and some rehearsal students will be able to perform these stories for the wider school and their parents.

I was also asked to run clowning and physical comedy workshops with the older theatre students.   Many of  whom I have had in previous years and they understood the physical and playful nature of my classes.

This time we decided to create some simple clown routines that could be performed in the local villages that form part of the city of Ahmedabad. In devising the routines I asked the students to be aware of the status relationship between their  clown characters. A topic which has a lot of relevance here. I based the routines around “the park bench” and at the same time taught them the some basic slapstick which they could put to good use in their routines.

At first I insisted on no dialogue in the improvisations, and encouraged strong physical gestures in their  clown characters. This got the students to lose their inhibitions and enjoy playing the fool. I love telling students this is the class where it is important to be silly!

As they became more confident in what they were doing, I brought back the dialogue, in their mother tongue, which

for most of them, is Gujarati. The results were hilarious.  I think with some more rehearsal they will have some fabulous pieces to perform for the communities that live around them. 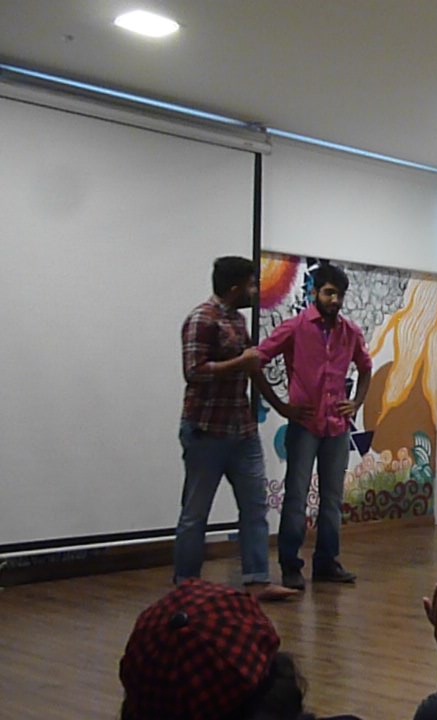 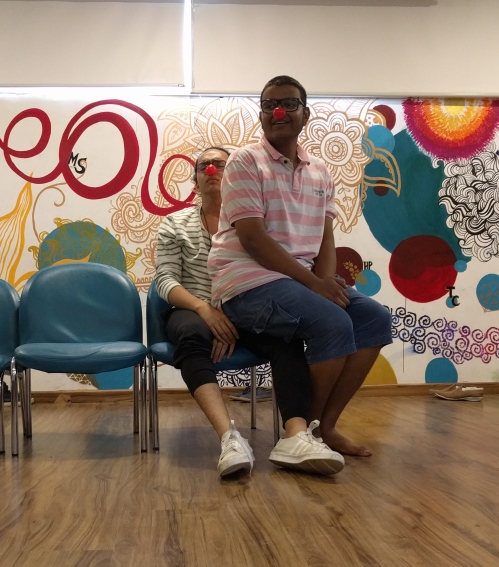